“Welcome to Historic Cooksville” signs were recently installed on the four roads leading into the Village of Cooksville. The new “Welcome” signs are placed on the east and the west entries to the village on State Highway 59; on the north entry on State Highway 138; and on the Tolles Road entry from the south. The Village of Cooksville is located in the Town of Porter near the northwest corner of Rock County.


The “Welcome” signs were designed by Cooksville resident Joe Lawniczak, with project assistance from Susan Lawniczak and Mary Zimmerman, and with the cooperation of several local property owners and the Town of Porter. The project was funded by the Historic Cooksville Trust, Inc.

The large white placard design features a black-painted image of the historic Cooksville Schoolhouse bell-tower and the “Welcome to Historic Cooksville, 1842” greeting in black.
The Village of Cooksville was established by John and Daniel Cook who arrived in 1840 and established their village in 1842. Their land was purchased near the Bad Fish Creek from the U.S. Government in 1837, when the Wisconsin Territory lands were first sold in the area.
The village expanded in 1846 when Dr. John Porter of Massachusetts platted the Village of Waucoma directly to the east of Cooksville on land he had purchased from Senator Daniel Webster, also of Massachusetts. (The nearby Badfish Creek had first been called “Waucoma Creek.”)
The two villages grew together over the years, sharing blacksmith shops, various stores, small factory workshops, a stagecoach inn, a school, and two churches. The combined villages were alternately called “Waucoma” or “Cooksville” on maps depending in which of the two villages the officially appointed Postmaster was located. But the growth of the villages slowed considerably after one of the newly-planned Wisconsin railroads bypassed them in the late 1850s.
The well-preserved community was listed in the National Register of Historic Places in 1973 as the Cooksville Historic District. It was also listed in the Wisconsin Register of Historic Places and has been established as a Town of Porter Historic District.

The present-day Cooksville Community Center, located in the historic schoolhouse on the Public Square features community events, and the historic Cooksville General Store—the oldest operating in the state—specializes now in a variety of groceries. And the old Cooksville Cemetery still invites long-term residents.

It is hoped that the “Welcome” signs, manufactured by Busch’s Signs & Designs of Verona and installed by SignMaster of Sun Prairie on August 30, 2019, will bring attention to the historic village, especially to highway drivers who may then slow down to enjoy the historic setting—and avoid sending anyone to the nearby historic cemetery. 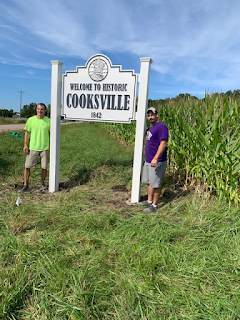 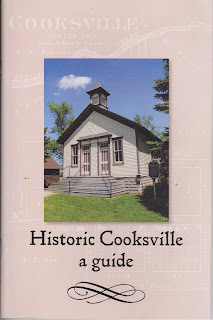