Then, 180 years ago, John Cook with his brother, Daniel, and other fellow travelers set out for their new Wisconsin lands. Besides John and Daniel, the pioneering group included Daniel’s wife Elizabeth and daughter Rhoda; Mrs. Cook’s brother James Shurrum and his wife Hannah Courter; and Hannah’s sister Angeline Courter Johnson and her husband David Johnson and their three children.

The Cooks, Shurrums and Johnsons traveled in wagons, probably covered and pulled by yoked oxen, probably accompanied by a horse or two, probably with a cow or two, and, no doubt, with chickens.

They were a typical family group migrating westward, traveling from Ohio to Wisconsin across prairies, over rivers, through oak openings and oak savannas, and typically following dirt trails made by government land surveyors, by soldiers, by early traders, and by Native Americans.


On June 25, 1840, the families arrived at the growing village of Union in Rock County, the midway stagecoach stop between Janesville and Madison and the only village in the area. Union already had a stagecoach inn and tavern and was a jumping off place for new settlers in the area.

According to a daughter of the Johnson’s, when the families arrived in Janesville there were several houses and one general store and only one house stood between Janesville and Union.  Besides the stagecoach inn, she observed only two houses in Union, which was the only settlement for many miles around,

Cook’s new lands lay three miles further to the east of Union. The Johnson family remained in Union, but the Cooks and the Shurrums traveled the three miles further east to Cook’s prairie land in the oak-openings along a fast-flowing, fish-filled creek. The creek originally was called “Waucoma” by the Native Americans, apparently named after an American Indian chief.  But the creek had also been re-named “Bad Fish” by surveyors and map-makers in the 1830s. (Maybe it had too many catfish in it, like the nearby Yahara or "Catfish Creek.")

When the Cooks and Shurrums arrived at their destination that day in 1840, they initially resided in their wagons and tents. Most likely, before winter set in, they built themselves a log cabin—the first dwelling in Cooksville—to shelter the families. They probably also built a log shelter for their animals ( barns for the animals were often built first). The log house reportedly was about 14 feet square without floors or doors or windows, probably with a crude earthen and stone fireplace on a dirt floor. A split log floor typically added later.


It was reported that the families were bothered by howling prairie wolves and frequent deer foraging in their gardens.

The Cooks built a saw mill on the Bad Fish Creek in 1842, which provided sawn lumber for their new permanent house built in 1842. The house featured hand-hewn beams and some hand-split or riven lath to hold the plaster on the interior walls. The Cook House remains standing as the oldest house in Cooksville.

Also in 1842, the Cooks officially platted three blocks of a village they named “Cooksville.”  Located on the edge of their quarter-section of land, Cooks’ village plat included three blocks of six lots each, all on the west side of what became  the village’s “Main Street,” now State Highway 138.

Apparently, John Cook married his wife, Nancy Ann, sometime after 1840.  Little, in fact, is known about John and Daniel Cook and their families, or about the Shurrums. The Cooks did not stay long in Wisconsin. By 1850, the Cooks had all gone further west, to West Union, Iowa.

Of course, other migrants soon followed, settling in the southern part of the Wisconsin Territory. In fact, the population of Wisconsin jumped dramatically from about 3,000 in 1830 to 11,683 in 1836, and then to 305,391 in 1850 after becoming a state in 1848.  One by one, family by family, the early settlers arrived, lured by inexpensive land and great expectations.

Several other villages were planned and “platted” nearby in the area. They were named “Saratoga,” “Carramana,” “Van Buren,” and “Warsaw”— but the speculators’ lands mostly went unsold and those “paper villages” went unsettled.


In 1849, John Cook sold his holdings and moved west to West Union, Iowa, never to return. His pioneering brother Daniel would follow him in a year. There they operated a general store as well as the first hotel in town.
The Cooks left behind a very nice accomplishment: their name on the growing and lively little Village of Cooksville, which soon had  another village platted next to it in 1846 by the Porter brothers of Massachusetts: the Village of Waucoma.

The two villages attracted new settlers, reaching a total population of about 175 persons, even after the expanding railroad companies by-passed the villages in the 1850s and ‘60s. 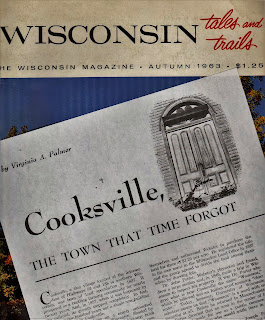 The historic Village of Cooksville was listed in the National Register of Historic Places in 1973, with the NRHP listing expanded in 1980. The Cook families would be pleased.