The "Pearl Craze": Pearling in the Badfish Creek, by Larry Reed


In the late 19th century, everybody was wading in the local creeks and rivers in southern Wisconsin searching for pearls, even in the little Badfish Creek flowing past Cooksville. 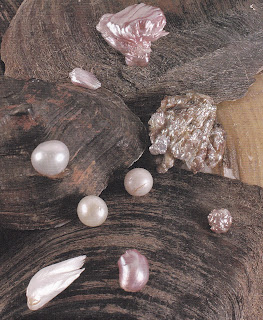 The “Pearl Craze” had begun in August of 1889, when a pearl was discovered in a clam in the Sugar River, which flows through Brodhead, Wisconsin, and the result was a “pearl rush,” not unlike a gold rush. The headline in the local Brodhead weekly of August 8, 1889, declared in large type-face: “PEARLS” EVERYBODY HUNTING THEM! One is Found That is Worth $100 BETTER THAN A GOLD MINE!

Searching shallow waters, scrapping through the muck of the area’s rivers and creeks was widespread as people dug up and eagerly cracked open what had once been useless clams. All were hoping to strike it rich by discovering a perfectly spherical or drop-shaped globe of shell material surrounding an irritant inside the mollusk.

The “pearl craze” spread throughout southern and western Wisconsin, from Cooksville’s little Badfish Creek to the mighty Mississippi River. The size and quality of the fresh-water pearls found inside the clams varied greatly, and colors ranged from lavender to pink to white and blue. Usually, small round pearls sold for a few dollars or so, but even a $10-pearl was worth about a week’s wages in the late-19th century. Larger flawless spheres were much rarer than the more usual, small, irregular pearls and much more highly valued.

Some pearlers struck it rich with large, colorful spheres. A few people in the Brodhead area were able to build new homes with their findings; one even bought a new farm. A total of about $300,000 worth of pearls were collected in southern Wisconsin by the end of 1891, making pearl revenue one of the highest of all natural product revenues in the state.

Pearls of small, irregular sizes were found almost everywhere as the “pearl rush” continued for a few years. People searched the Badfish Creek, but unfortunately there are no records of successful “pearling” in the little creek. However, a few odd-shaped, iridescent, little “gems” may well have been found. 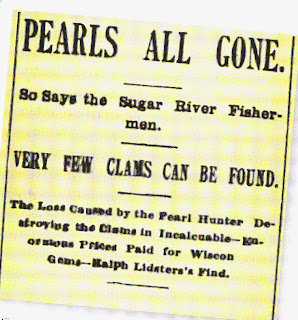 Mostly, the clamorous craze resulted in lots of opened clams left to rot on the water’s edge, the “meat” being considered inedible. By 1891 a headline in the Janesville Gazette lamented, “Pearls All Gone….Very Few Clams Can Be Found.” The waterways apparently had been stripped of their clams.

On the other hand, the pearl-button industry boomed, using empty clam shells to punch out new, shiny buttons.

Today, the Badfish Creek welcomes canoeists and fish swim freely, thanks to the improved treatment of waste-water from the City of Madison. No doubt some clams still live in the creek—and, probably irritating grains of sand in some of them are still being coated with shell material to create a few new, lustrous, little pearls.

[The Wisconsin Magazine of History, Spring 2012 (Volume 95, Number 3) issue contains an informative article about the discovery of pearls in Wisconsin, titled “The American Pearl Rush: Its Wisconsin Beginnings,” by George Johnson. And the Friends of the Bad Fish Creek Watershed organization keeps an eye out for the quality and enjoyment of the creek.]