Tom Every, “Doctor Evermor” the Sculptor, has Died


Tom Every, also known as Doctor Evermor, the imaginative self-taught artist, died on March 30, 2020, in a Sauk City nursing home. He was 81. Dr. Evermor spent some of his creative time working on sculptures at his son's blacksmith shop in the Village of Cooksville in Rock County. 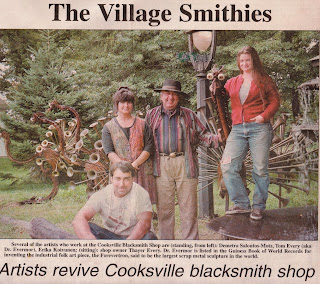 Tom, a former salvage operator turned metal artist, took the name of Dr. Evermor and began creating a massive art park near Baraboo to display his inventive and futuristic creations. In Cooksville, he also created a number of sculptures in the shop next to the historic Cooksville General Store.

Tom Every, born in Madison, was raised in the village of Brooklyn, Wisconsin, where his love of salvaging, saving, and re-using began when he was a child. His love of salvaged materials and the creations they inspired grew, and in the 1980s Tom chose to be known as “Dr, Evermor,” the artist.

He soon created the huge, fantastical "Forevertron," which has been called the largest scrap metal sculpture in the world. It would become the center piece of a three-year project that eventually led to the creation of hundreds of whimsical sculptures in his park near Baraboo across the highway from the former Badger Army Ammunition Plant. His dragons, trolls, gazebos, critters, and other mysterious and amusing metal constructions surrounded his magical “Forevertron.”


Tom was a frequent visitor to historic Cooksville where he and other artists and assistants created many of his sculptures at his son’s blacksmith shop. Many metal creatures took shape there—butterflies, fish and birds—especially birds, both small, large and, yes, (E)very large. Two of his huge birds—the dramatically towering "Dreamkeepers”—created in Cooksville now stand watch on south Patterson Street in Madison.

In 2011, Tom received a Wisconsin Visual Art Lifetime Achievement Award, and in 2016 was presented a Friend of Preservation award from the Madison Trust for Historic Preservation. He has been recognized as an important and singular artist. 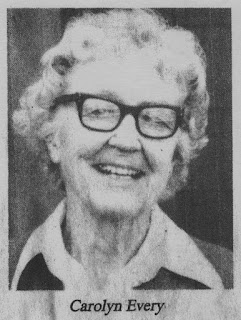 By the way, Cooksville was also the brief residence of Tom’s aunt, Carolyn Every, who at a young age in the early 1930s was the cook and traveling companion for the most famous acting couple in the country, namely, the Lunts—Alfred Lunt and Lynn Fontanne—who lived in their “Ten Chimneys” estate at Genesee Depot, Wisconsin. “For a brief, magical time,” Carolyn later wrote, “I became a part of the Lunts’ lives.” She shared many of her stories with her Cooksville friends who encouraged her to write them down and were published later in the Wisconsin Magazine of History in 1983.

Tom Every was also part of John Wilde's painting and prints of the "15 Cooksvillians." John Wilde (1919 - 2006), a "Magic Realist" artist and University of Wisconsin-Madison professor, lived near Cooksville, and one day he took photographs of men he found in the village, including Tom working in his welding helmet and apron. In 1995, John created an oil painting of the 15 Cooksvillians (now in the UW-Madison's Chazen Museum) and in 1997 hand-colored prints of the rearranged men, including Tom.

Tom Every, the hard-working and unconventional artist known as Dr. Evermor who created something out of seemingly nothing, finally wished to rest in the historic Cooksville Cemetery.
“A Mythic Obsession: The World of Dr. Evermor,” a book about Tom Every and the world of Dr. Evermor, has been written by Tom Kupsh and published in 2008 by the Chicago Review Press.