After the arrival of the Cooks in 1840, the village they founded soon experienced an early boom in business creation and in new settlers. However, Cooksville would later slowly decline as the new railroads that replaced the old stagecoach routes in southern Wisconsin by-passed the village.
But the good news is that this downturn in growth slowed new construction in the village, which helped preserve many of the oldest buildings that now comprise the Cooksville Historic District.
Over the years, early U.S. census listings, business directories, and Rock County histories in the Cooksville Archives collections provide a historical record of the various non-farming business operations in the village and in nearby Porter Township. These early entrepreneurial listings, complete or incomplete, date from the 1850s to the 1920s.


1842
Cooksville’s first full-fledged commercial enterprise opened in 1842. This was the Cook brothers sawmill, later a grist mill, on the Bad Fish Creek.


1845
In the fall of 1845, John D. Chambers, who had arrived in Janesville earlier in the year, came to Cooksville to open a branch store in the village.  The location of this first store was on the southeast corner of what came to named Main and Dane Streets, across from the present extant historic General Store. (Chambers’ original store building stood until about 1902.)

Near the northeast corner of those same streets where Chamber's Store once stood, a prominent village commercial building owned by John Van Vleck was built in which James Van Patten operated a meat market. The building,  built about 1845, later became known as Van Vleck’s Hall or the Cooksville Opera House when in 1867 Van Vleck enlarged the building by adding a second story hall used for music, lectures and programs. A variety of businesses operated on the first floor over the years until the building—with the Opera House— burned down in 1893.
The present Cooksville General Store was built about 1847 and was operated by Earle Woodbury, who eventually leased the second floor to the newly organized Masonic Lodge.Then, in 1864, the Masons purchased the building and expanded it with the store remaining on the first floor.


1850
The U.S. Census in 1850 counted the following non-farm employed individual occupations in Porter Township, most in or near Cooksville: eight carpenters, five blacksmiths, five merchants, two wagon makers, two hotel keepers, two physicians, one miller, one potter, one painter and one tailor. Business was booming, with two doctor in residence.
The two physicians in the 1850 listing were probably Dr. William Blackman who practiced from 1848 to 1855 and Dr. Roswell Van Buren who practiced from 1856 to 1862.
In 1866, a Dr. Roberts moved in, inspiring a local letter-writer to comment to the Evansville newspaper: “Cooksville, though it is not a Rail Road town, but it can boast of a fine healthy location. Doctors have always starved out, unless they had some other means of living besides pill peddling. Doctor Roberts has just moved in, may prove an exception, for he is a young man of much ability and with energy enough to take long rides to hunt up the sick ones, may succeed.”

Cooksville’s many blacksmith shops, indispensable in their time, operated in various locations and for various lengths of time, although in some cases the records are not clear as to their exact locations or durations.
With their red-hot forges and anvils, these small blacksmith shops were all-around repair and manufacturing businesses for farm equipment, wagons and carriages, horse shoes, household items and metal objects of every kind. A couple shops served this purpose on into the 20th century.
1856
In the 1856 History of Rock County, the list of businesses for “Cooksville” (and its larger next-door neighbor, “Waucoma”) included a sawmill-gristmill operation, the Waucoma House stagecoach hotel and tavern, a sash and door factory, three general merchant stores, one blacksmith shop, two brickyards, a wagon shop, a cabinet shop, a tailor shop, two shoe shops, a post office, the Waucoma Academy school, and several carpenters. (The regular Cooksville School was also operating.)


1875
A business directory from 1875 listed two general store operators, two grocers, a wagon maker, a builder, a blacksmith, a flour mill operator, a corn planter manufacturer, a postmaster and a new cheese factory. The population was numbered at 150, with daily mail service.
A newspaper article mentioned a tin shop was operating by 1879. James Fairgrieve, operator of the tin shop, had gained notice in the Janesville Daily Recorder early in 1879, when the newspaper’s Cooksville correspondent reported, “This ‘burg’ is putting on metropolitan airs with four street lamps. Mr. James Fairgreeves (sic), our tinner, has displayed both taste and skill, besides a generous gift of a fine street lamp, and the same has been put in position at the corner of the church by B. S, Hoxie.”
Praise was also given to Fairgrieve’s shop, where “everything is as neat as a pin” and where Fairgrieve could do “everything in his line, from a birdcage to the roofing of a building” and “can make anything you want, even to a hanging chandelier.”
In 1880, Cooksville had a new resident physician, Dr. Charles Culver, but he soon moved on, as other doctors did, because, as the local newspaper reported, “This vicinity cannot support a doctor, it is too healthy.”

1891
The businesses listed in 1891 were a blacksmith, a postmaster, a flour mill, two general stores, a corn planter manufacturer, a carpenter, a broom manufacturer, a justice, and a music teacher.  Elsewhere the records mention that the Waucoma House was still operating as a stagecoach stop, and a tin shop and a harness-maker were also still in business..
In 1891, the Evansville newspaper reported, “Mr. Spencer, the harness-maker, is drove with work and the reason why is that he always does a better job for a man than he agrees to, and in more than one instance the farmer has made him a present so well earned and merited. We are glad to note the prosperity of honest workmen in any capacity.” (But two years, later in 1893, Spencer moved with his family to northern Wisconsin.)

1894
According to a notice in the Wisconsin Tobacco Reporter of Edgerton, five blacksmith shops were in operation in Cooksville in 1894, probably not all at the same time. The population remained about 150.

1904
By 1904, the non-farm business listing was getting shorter: an agriculture implements factory, a meat market, a grocer, a general store, a blacksmith, and a postmaster. Population was about 100. (The official post office had ceased operations in 1903 but mail was probably still dropped off from Evansville by horse and buggy.)


1920
A directory from 1920 listed just a grocery store and no other official businesses. Other information indicates at least one “repair shop” remained with one smithy still operating it. The directory listed no population figure, but no doubt it had declined also.
Businesses had almost disappeared. The early settlers had retired or passed on. The younger generation was moving to larger, nearby communities; some took over the area’s expanding farming businesses.
The old Village of Cooksville (including its larger, next-door village of Waucoma) began resting on its pioneering laurels of the many early, sturdy homesteads and on the old general store, the one-room schoolhouse on the Public Square, the old cemetery, and the two 19thcentury churches, all with their charming historic character.


The name of Cooksville was unofficially adopted for the two villages, apparently because the last official U.S. post office, which had operated out of various politically-favored local stores, had been located in the old Cooksville General Store, which was on the Cooksville side of Main Street.
The two villages became one and took on a new, quieter, slower life as the 20th century progressed, with many older residents and some summer residents.  Electricity arrived in 1917, with few immediate customers. (Previously, the flowing Badfish Creek provided the needed power for the gristmill, and one horse walking in a circle powered the old farm implement factory.)
Some small businesses continued to operate in the early 1900s. They were the old General Store, a smithy’s repair shop, a summer ice-cream shop. A couple small grocers came and went, some serving their merchandise to villagers from the front rooms of their homes (the Collins House, the Cook House). And the Cooksville Schoolhouse continued its educational and community mission with a variety of teachers, until the consolidation of rural school districts in 1961.
But an important “economic-related” cultural event quietly occurred in 1911. Ralph Lorenzo Warner purchased the village’s old Duncan House, located next to his friend Susan Porter’s house. Warner turned the old house and yard into a showcase of 19th century American life with period furnishings and decorative arts and with an extensive period flower and vegetable garden to stroll through.

Warner’s unusual efforts attracted curious visitors who admired his antiquarian creations. He soon began serving his (paying) guests lunches and dinners and entertained them with piano music in his antique-filled home. Warner named his life’s project the “House Next Door” and he quickly garnered local, state and national notoriety for his unique “business” of celebrating American history. And his success attracted the attention of other like-minded preservationists and admirers to his adopted historic village of Cooksville, proving that preserving historic properties can bring attention—and business—to communities.


By the mid-20th century Cooksville had managed to attract a few new small businesses: a welding and repair shop, an arts and crafts store, a popular snack shop, and­­­­ an antique shop. The General Store remained in business. 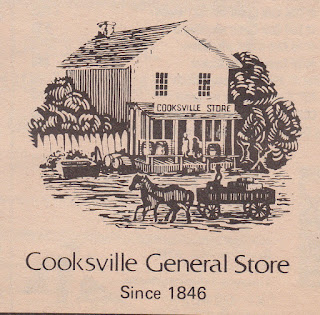 The Cooksville Welding & Repair Shop, located next to the old Store, was opened in 1956 by Charles Gilbert. His business was to “do wrought-iron, custom-built if you like, ornamental porch posts and railings.”
Marvin Raney operated two small businesses. The first was the “Cooksville House” located in the Duncan House barn in the 1950s selling local arts and crafts. 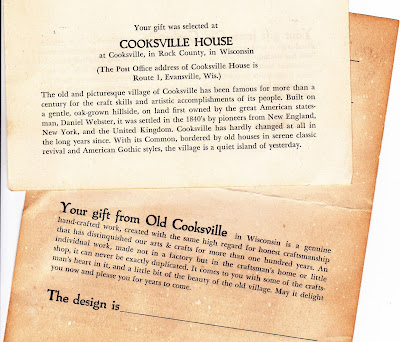 Raney’s larger antique store, the “Only Yesterday Shop,” was opened a few years later in the Granary on the historic Joseph Porter Farm east of the village.
Also, in the 1950s, the Ortman family opened their famous “Snack Shop” on Main Street north of the General Store in Cooksville.
Then in the 1960s, George and Eunice Mattakat opened their “Red Door Antique Shop” in the historic Cook House.

By then, the Village of Cooksville had evolved into a quiet life style, that of a small, rural, well-preserved historic community, which was becoming known as “the Town that Time Forgot” and as a “Wee Bit of New England in Wisconsin.”

[The information and images are from the Cooksville Archives, maintained by the  Historic Cooksville Trust, Inc., which welcomes donations. Contact Larry Reed at (608) 873-5066.]
Posted by Larry Reed at 11:12 AM