The historic Cooksville Congregational Church will soon take on a new role in the Village of Cooksville—it’s fourth role in its 140 year history. 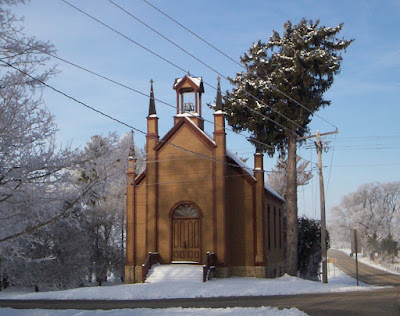 Dedicated on December 18, 1879, the church began its first role in the community as the first church built in the village, which had been established in 1842. It was designed and constructed by Cooksville’s important architect and builder, Benjamin Hoxie.

A subscription for building the church started the year before, and It was to be owned by the Congregationalists but free to be used by all other Christian denominations. The church would also provide rent-free use of its spacious basement “parlor” for community organizations and events—meetings, parties, celebrations, entertainments.

Carpenters and artisans from Evansville, Janesville and Chicago, as well as talented local Cooksvillians, contributed to the creation of an impressive, spacious, handsome country church, with kerosene-burning light fixtures and a furnace that used either wood or coal. Included were two outhouses and a covered shelter for horses behind the church.

The design of the church was described in a local newspaper article at its dedication in 1879:  “The plan adopted was what might be termed the half Gothic with circle head windows… with small towers and minarets on the four front angles, and an open bell tower… The exterior is painted light brown with dark trimmings…. The audience room will seat nearly three hundred persons very comfortably, being 30 x 50 feet. This is accomplished by the use of wall seats hung on hinges to be raised as needed…”[Ed. note: the seating capacity seem excessive unless the number/size of the original pews was much greater than at present.]

The article also reported that Congregational, Methodist, Baptist, Unitarian ministers were invited to the dedication, including the uncle of Frank Lloyd Wright, Reverend Jenkin Lloyd Jones, who “… gave a lecture in the evening, to a large audience, subject, ‘The Cost of an Idea,’ to which his audience listened spell bound for nearly two hours.” And all seated on those new, hard, wooden pews and the wall-hung wooden benches.

By the beginning of the 20th century, the Congregationalist membership of those early settlers had diminished, with many moving away or otherwise departing. A 1909 newspaper clipping asked, “Shall we repair our church, so we can use it?” The basement parlor, however, continued to host various village meetings and programs, mostly because the new 1897 Norwegian Lutheran Church in the village did not have a basement until 1930.

Fortunately the Congregational church found a guardian and caretaker in Susan Porter, daughter of William Porter, an early settler and Congregationalist. Miss Porter, who had been living and teaching in Racine, returned to live full-time in Cooksville about 1925; she had been using the village’s “Waucoma Lodge” as her summer home.

The last service in the church was held on September 3, 1939, the birthday of Miss Porter: it was a memorial service for her, who had died that summer.


The church’s second role began later in 1939, when the Wisconsin Congregational Conference deeded the now-abandoned church property to the Town of Porter. The church soon began its new role as the first Town Hall for Porter Township. The Town made modifications to the exterior and to interior spaces: the bell tower and minarets were removed, as were most of the stained glass windows and all the pews. The basement parlor was converted into a work-space and garage to store the town’s truck.

During World War II, the area’s young men were treated to hot coffee in the new Town Hall before they went off to war. Other important Town business was, no doubt, also carried out.

But in 1961, when the rural one-room schools were consolidated into larger schools in Evansville, Edgerton and Stoughton, the Town of Porter purchased the abandoned Wilder School for its use as a new Town Hall. Eventually the Town Board decided to sell the old church-and-town hall building in a sealed-bid auction in 1971.


Michael Saternus, a Madison architect, who lived nearby, had been restoring local historic buildings and had friends in Cooksville. Michael submitted a sealed bid for the church. In March 1971, the Janesville Gazette newspaper reported that “Five bids were submitted for the building… they ranged from a low of $1,000 to Saternus’ $2,250.”  The title of that newspaper article was, “Officials Happy with Sale of Town Hall,” and, as Michael told friends, “So was I.”
And Michael proceeded to rebuild and restore the missing exterior historic features, with some help from friends and neighbors.
This was the third role for the historic church building. Michael, with a little help from Larry Reed, restored the exterior of the church, replacing the missing features and rehabilitating and re-painting the exterior on weekends over many years—and in the process, discovering an original stained-glass window that had been sealed and hidden intact inside the west wall. (The other colorful Chicago-made windows had been replaced many years before.)


Unfortunately, Michael died in 1990, but the interior rehabilitation of the church continued. The decision was made to restore the interior so it could be used for various ceremonies—weddings, baptisms, funerals, as well as musical performances and meetings, all of which occurred in the church’s third role as an “assembly hall.” A wedding of Larry Reed’s friends, David and Diane Lowe in 1993, was the first new use of the historic Cooksville Church in its third role. Many more weddings, ceremonies, and musical performances would follow for the next 25 years. The Stoughton Chamber Singers were a popular spring event.

The new fourth role of the church has begun in 2020. That role is to accomodate the church’s earliest purposes once again and, importantly, to serve the additional role as the “Cooksville Archives and Collections Center,” to be located in the basement “parlor.” 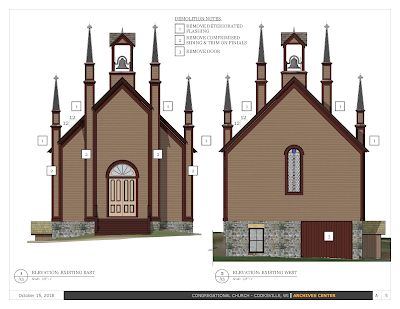 The new Center will include secure and accessible archival space, office space, a meeting room, a utilities room, and minimal kitchen and toilet rooms. And the upstairs auditorium will continue to be available for ceremonies and musical performances. Architect Michael Bolster of Janesville created the drawings for the proposed project.

The Cooksville Archives and Collections Center is designed to house the large accumulation of historical documents and materials that have been gathered and kept in the village for the past 180 years—documents, photographs, diaries, letters, books, clippings, paintings, furniture, and other artifacts and objects, as well as items that will continue to be donated.

The church and the history center will be owned and maintained by the Historic Cooksville Trust, Inc., the local charitable organization that seeks to encourage and assist in the preservation and conservation of historic Cooksville and the surrounding area in the Town of Porter, Rock County, Wisconsin.

The realization of this new and expanded role for an important historic Cooksville building is possible thanks to generous donations of funds, pledges, and materials to the Historic Cooksville Trust, as well as to the time and effort of the Trust Board and friends of Cooksville.

This Archives and Collections Center project will finally create a safe and secure location to preserve, maintain, and celebate Cooksville’s long history as a well-preserved, early Wisconsin village. 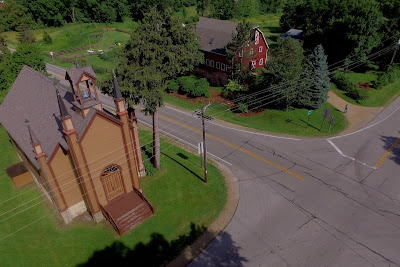 The first step to create the fourth role for the church has begun with the recent removal of the tall red pine tree at the corner of the church. Planted about 140 years ago, its size was damaging the church building and foundation, as well as interfering with overhead power transmission lines. 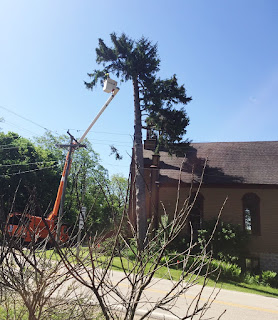 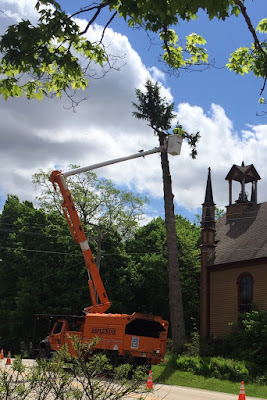 Alliant Energy recently cut the tree down to below its power lines, and then a local wood-worker cut down the bottom half of the tree and removed it and the debris. All this work was done at no cost to the Trust. 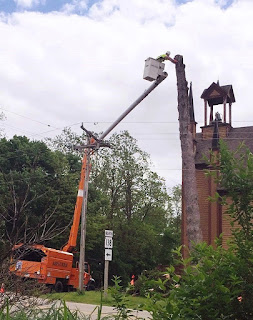 The new role for the church joins a long list of about twenty other historic preservation and rehabilitation projects that have improved and enhanced Cooksville's historical heritage over at least the past fifty years.

The Historic Cooksville Trust welcomes further assistance and donations as Cooksville continues to preserve, enjoy and benefit from its past as the village moves through the present and into the future. 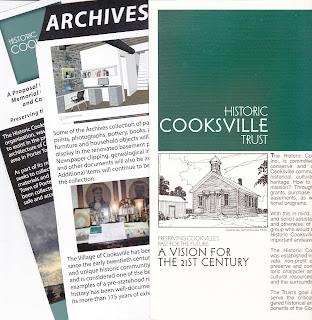