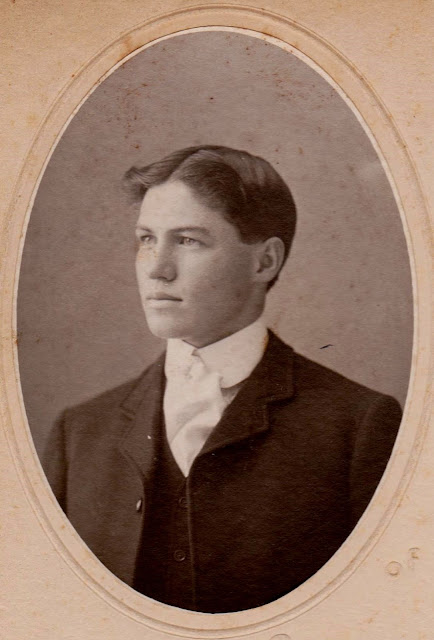 The Porter family was a large, active, adventurous, well-educated, community-minded and talented family of farmers and merchants in what became named the Town of Porter in 1847 in the new Wisconsin Territory.

“Stories My Father Told Me,” are personal, colorful, and occasionally humorous glimpses into Warren’s life at that time, about 100 years or more ago, certainly before Prohibition (1920-1933) closed down many of the local taverns.

“In my father’s family there were three boys: Lloyd, Warren, and Paul. Paul excelled in athletics, scholastically and, as well, extemporaneous speaking. Curly hair, parted in the middle, he cut a handsome figure. When he was 19, attending the University of Wisconsin with his brothers, he suffered a burst appendix and, I presume, much pain before he died.

“Grandma Porter (Lillian Newman Porter) was a large woman who, it seemed, was always hooking rugs. She lived in Evansville supported by an adopted daughter, Rebecca, who worked in the bank. Becky had an affair with a married man but nobody talked about it. His son was even a classmate of mine. She used to drive and pick up my brother and myself and take us to a picture show on occasion.

“I think my father was misplaced as a farmer. He had personality and would have made a great salesperson. Ironically, I think his genes are in two of his grandsons, my sons, who are both blessed in that regard.

“Now to some stories he told me. He was a great story teller. Many were stories about Indian fighter Buffalo Bill versus Yellow Hand, circling the campfire, each with a knife in hand. Pure fiction, but we loved it!

“The true stories concerned mostly the neighbors. We lived between Norwegians on one side and Irish on the other. It seemed that the Irish were the more likely to be in a firestorm than the other more complacent Norwegians. Grandfather’s immediate neighbors to the north across the road were an ever changing identity. My grandfather noticed one summer day that his chickens were disappearing more rapidly than the usual low rate of attrition (rats, mink, fox). He suspected the neighbors but it took a little detective work to discover that a well-placed trail of grain led directly to the neighbor’s chicken coop. He discovered his flock by the expediency of removing the door of the neighbor’s coop and the chickens ran back across the road where they belonged.

“The neighbors one half mile east were the Fords, John, Ed and Maggie. None ever married. One incident happened before I was old enough to know them. John it seems, or as he was called three fingered Jack, got mean when he was drunk and that was often. When that happened, he used to beat up on his brother Ed whom he supposedly loved.

“One night there was a pounding at the front door which upon being opened by my sleep-deprived father revealed Ed in a state of disarray. They had been indulging in a bit of the grape, a fight ensued and Ed was seeking protection. Sure enough Dad would hear John not far behind, muttering curses as to what he would do when he caught that s.o.b. Dad afforded safe haven until they figured John was asleep or sober enough whereupon Ed would creep home.

“The neighbors across the field (the Stearns) had one dog and a parrot that could talk. Old man Stearns’ wife had died, and not surprisingly he had turned to the grape as a source of solace. I’m sure he loved his dog “Watch,” but when under influence treated him less than kindly. The parrot, being no dummy, listened and absorbed some of this language. One day, returning from Edgerton with a snootfull, he went to the front door to call “Here Watch, here Watch.” The dog, hearing the familiar voice, came running to receive— food? love? — whereupon just as the dog reached the hand of love and devotion, the parrot from his lofty perch shrieked, “Get out of here, you son of a bitch!” Tail between his legs, Watch headed for the relative safety of the barn!

“The neighbors also north by west were named Osterheld. Mr. Osterheld was a successful farmer and he had a fine place with a ballroom on the third floor. Mr. Osterheld and his family raised a lot of tobacco and they had a fine carriage and a beautiful span of horses.  Mr. Osterheld’s favorite watering hole was somewhere in Stoughton. When he left on his carousing course he always shut the gate to the farm behind him. He would get loaded and then climb into the buggy and head for home—a distance of some ten miles. His horses were so attuned to this procedure that he would just give them the go ahead and they would take him home while the rumble of wheels lulled him to sleep. When they left the main road onto the lane home, the horses, sensing home, would break into a run.

“Mr. Osterheld, half asleep and drunk, was unable to impede horses’ haste and the result was a smashed gate, damaged harness, buggy, or all three. The next day was rebuild time and this, according to reliable sources, happened many times.

"The next story involves a Norwegian named Jens Norem. Jens was working for my grandfather in harvesting a crop of tobacco. Jens also liked to go over to Stoughton and belly up to the bar with the boys.

“Normally a peaceful fellow, this particular night Jens became embroiled in an altercation of some sort which resulted in the sheriff coming to produce charges against Jens. They were in the shed hanging tobacco and Jens being a bit overhung was gamely trying to keep up his end. Of a sudden someone spotted the sheriff’s buggy entering the yard.  Dad said Jens climbed the tiers of the shed “like a cat” where he hid in one of the roof-top ventilators which measured about 4 feet by 5 feet. The sheriff hadn’t seen Jens and we don’t know yet if Jens ever had further repercussions from his adventures in Stoughton.”

Thus ends Warren Porter’s stories as told to and written down by Bill Porter.

Porter family members, still living in the Cooksville area and some elsewhere, have recently donated family items including photographs, original poetry and other writings from the 1840s and 1850s, for future generations to enjoy.
*     *     *
[Special thanks to Helen Porter who shared photographs for this story and also donated several to the Cooksville Archives and Collections. Larry A. Reed]