In 1929, Susan Malvina Porter of Cooksville wrote a remembrance—or a “sketch,” as she called it— of her Grandmother, Amey Pitman Potter Porter (1789-1871). Susan recited her story as part of a family reunion or part of the many popular annual “Old Settlers Picnics” held in the village. And she may have used the Cooksville Cemetery as a backdrop for her story.

Grandmother Amey Porter was born in Rhode Island and married Dr. Isaac Porter (1783-1854). They had three children: William Micaiah, Joseph Kinnicutt, Phebe Rebecca and Isaac Gallup. The family decided to settle in the new lands of Wisconsin, but unfortunately when Dr, Porter traveled later to join his family in Wisconsin, he acquired cholera from an ill boat passenger whom he had treated on the voyage through the Great Lakes. The Porters’ daughter Phebe, unfortunately, also died of cholera that same year. After the deaths, Grandmother Amey continued to live in Wisconsin with her sons.

Susan Porter (1859-1939) was the daughter of William Micaiah Porter (1818-1891), one of the three Porter brothers born to Amey in Massachusetts. All three brothers eventually settled in and near Cooksville. William had traveled to South America (his diary of that trip is in the Cooksville Archives) and came to Cooksville in 1849, but soon joined the Gold Rush to California. He eHereturned in 1852 and married Aura Virginia Wheeler (1832-1884) in nearby Green County. William and Aura lived there before settling down in Cooksville, near William’s two brothers.

Susan was a life-long teacher in various southern Wisconsin communities. She wrote this brief story about her Grandmother, which provides glimpses of early life in the Wisconsin frontier settlement established by the Porters in 1846 on land they had purchased from the famous Senator Daniel Webster. The Porters named their newly-platted village “Waucoma,” which they located next to John and Daniel Cook’s earlier Village of Cooksville platted in 1842.

"Our Grandmother, Amey Pitman Potter Porter, was born 140 years ago in Providence, R. I., that is, in 1789, six years after the Revolutionary War ended. She was the daughter of Capt. Wm. Potter and Amey Pitman. Capt. Wm. Potter raised a company in Providence, R. I., was chosen Lieut, but acted as captain, and then marched during the night to join the force at Boston. They had already reached Dorchester Heights when the battle of Bunker Hill had begun.
Our Grandmother, Amey Pitman Potter Porter, was the oldest daughter of Capt. Wm. Potter in a family of eight. She had great beauty and intelligence. After she returned from Boarding School, she had many suitors who sought her in marriage. The successful wooer was Dr. Isaac Porter, at that time a student in Brown University, Providence. He took his degree from Brown in 1808 and received his medical degree from Dartmouth College in 1814.

Our Grandmother, Amey Pitman Potter Porter, was married to Dr. Isaac Porter in 1817. They established a home at Charlton, Mass., fifty miles from Boston. Four children were born to them: William, Joseph, Phebe Rebecca, and Isaac. 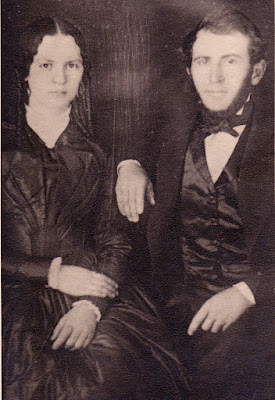 Dr. Porter was especially skilled in surgery and much of his practice was in Boston. Our Grandmother was proud of her able husband, but she longed for more of his companionship in their home. She always encouraged her sons to take up the independent life of a farmer.

The Middle West was beckoning. Wisconsin had a fair name.

This very spot on which the Cemetery is located is a part of the area taken up by Daniel Webster in 1837. He planned to have his sons establish an estate here. They were not of that mind. In 1842, he sold the land to his friend and physician, Dr. John Porter, brother of Dr. Isaac Porter. He had six sons whom he expected to place upon this area. The Golden West lured them, and they settled in California.

The sons of Dr. Isaac and Amey Pitman Potter Porter bought these fair acres and reared their families here. But to go back to Massachusetts: The whole family decided to migrate to Wisconsin. Dr. Porter was detained by business.

And now a crushing blow fell upon our Grandmother. As Dr. Isaac Porter was voyaging to Wisconsin, a case of Asiatic cholera developed on the boat. He volunteered to care for the patient.

When he reached Porter, Wis., he fell ill. As he rested on his bed the day of his arrival at Porter, he looked over the broad fields of golden grain and said to his son, “William, if it should be that I have but a few days to live, I am thankful I am here to see this rich and beautiful land.” In three days he had passed to the other shore—a victim of Asiatic cholera.

But this was not the only sorrow that came to our Grandmother. In three weeks her only daughter, Phebe Rebecca—dearly beloved and lovely in mind and heart—was stricken with the same dread disease, Asiatic cholera, and died.

Grandmother weakened in body under these great sorrows, but she was a true daughter of a Revolutionary soldier and her spirit was not quenched: she lived seventeen years after these sad events.

She used to sit by the fireside in her black silk dress and white lace cap and kerchief and cheer and advise her sons as they met the difficulties of pioneer life.

Grandmother was over fond of her grandchildren and because she thought we were so dear and good, we tried to be.

Blessing and being blessed, Grandmother finally said good-bye to us and passed to the house not made with hands.”

So concludes Susan Porter’s story of her Grandmother, which she apparently recited at an event in the old Waucoma Cemetery (now the Cooksville Cemetery) where many of the Porter family members are buried.

More such stories of the early village settlers written by relatives would be nice to have. Even now, stories of more recent or present-day people living in or near Cooksville in the Town of Porter would be welcome additions to the Archives, for future generations to read and enjoy.