The Cooksville Archives contains many newspaper clippings, some in personal scrapbooks, some in journals or letters, many undated but helpful in telling the story of the old Village of Cooksville in northwestern Rock County.

Some of the village’s history is recorded in hand-written reminiscences by the early settlers or their descendents, some by later residents of Cooksville, and some stories are by newspaper reporters or are contained in local gossipy “news” columns. They date from the 1830s to the present.

Here are a few excerpts:

“The First Impression of the New Wisconsin Territory by William R. Smith c.1837”

“The prairies may be passed over in any direction in a wheel carriage with ease and safety. The groves surrounding and interlacing and sprinkling and dotting the vast ocean of open fields can be treaded as easily with a carriage as if you were driving through a plantation of fruit trees. The undergrowth is generally small bushes readily passed over; the black current, the furred and smooth goose berry, the red and white raspberry, the blackberry, the haw, the wild plum, and the crabapple. All these are indigenous fruits and are found throughout the territory. The strawberry literally covers the prairies and groves. The hazel with its nut-laden branches is the most common bush in the country. Acorns, black and white, walnuts and history nuts are plentiful….

“The flowers of the prairie are various and beautiful… The red, white and purple chrysanthemums are very common… Delicate snowdrops and violets form a carpet… The strange peculiarity of the prairie sunflower or compass plant is that its leaves invariably point north and south… Perhaps there is not to be found any region in the United States better watered than Wisconsin…”

(William R. Smith (1787-1868) apparently wrote this in an 1837 letter to his brother which was quoted by Cora Atwood, a Cooksville historian, at an Old Settlers Reunion. Smith became President of the State Historical Society of Wisconsin in 1854.  Later Smith’s “first impression” was also included by Bertha Whyte in her book, “Wisconsin Heritage.”)

“Nobody knows exactly when this ancient wooden structure was built, but it is standing in ruins in the center of the quiet old village of Cooksville, on the Rock and Dane county line. It was built to be used by a Mr. Van Vleck as a corn-planter factory, and was probably the first small implement factory built in south central Wisconsin. Hand planters were made here before the Civil War, and tradition tells us they were good ones. Two of this man’s sons are living within a stone’s throw of the old building. One of the residents of Cooksville, Mrs. Savage, tells us that during the Civil War the settlers gathered in the upper floor of this building to listen to reports brought in my courier concerning the fate of the northern armies. It served both as a lyceum hall and academy.” 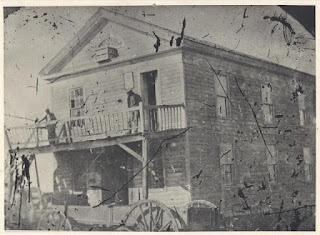 (Undated and un-named newspaper clipping, c. 1920s. The Factory was first built as Hoxie’s Sash and Door Factory in 1848 and was demolished in 1928.)

“One of the red-letter days in the history of Cooksville, occurred on the occasion of an Old Settlers’ Reunion, Sept. 20, 1901. Its first inception sprang from the neighborly talk of two or three: but the suggestion received instant favor and grew into large proportions as it became circulated abroad.

“Then on the above date there assembled a goodly number of the present and former residents of this pretty rural hamlet to celebrate the interesting event….their rank swelled to one hundred and fifty smiling, eager faces…. The Masonic hall, kindly donated for the occasion, proved a commodious apartment, handsomely carpeted and well lighted….Gideon E. Newman was chosen Chairman by acclamation. He came here in the early forties and was one of the boys of the early sixties who followed Old Glory for three long years o’er many a bloody field.

“The first speaker…was B. S. Hoxie, long a prominent citizen of Cooksville…giving many pleasing reminiscences, and calling attention to the numberless inventions and conveniences of the present day as compared with the past...

(Newspaper clipping not identified but probably from the Evansville Review, pencil-dated 1901.)

“…For the past few years, Mr. Porter had been the only man residing in Wisconsin who had ever looked upon the face of the great French friend of the United States, the Marquis de Lafayette. Mr. Porter saw General Lafayette in Boston in 1824. This was the occasion of his visit to America to accept the return of the money which he had loaned George Washington and by which the continuation and culmination of the war of the revolution was made possible. Mr. Porter was present when Henry Clay, then speaker of the House of Representatives, welcomed Lafayette to the country…”

(A typed copy of a portion of the Janesville Gazette’s obituary of Porter, February 16, 1907.)

“Stories were related by Miss Porter of some of the fugitive slaves who found their way to freedom through Wisconsin to Canada. ‘From 1840 to Abraham Lincoln’s proclamation, Wisconsin was the one state in the northwest which favored strongest the emancipation,’ declared Miss Porter…. ‘The portion of southwestern Wisconsin was called Abolition Hollow…’

“According to Miss Porter more than 1,000 slaves were helped to freedom through this ‘railroad’ while 3,200 people were in active service on this road….

“In 1842 the first fugitive, a woman named Caroline came to Wisconsin. Miss Porter related at length about Caroline’s escape from her mistress and her trip to Wisconsin and finally to Canada and freedom…she traveled with a group of college girls and was mistaken as one of them…she was taken to Milwaukee where she was taken care of by one of the conductors of the ‘underground railway’…she hid in a barn about four weeks…Later she was taken to Detroit…”

(This newspaper clipping is undated and unidentified, probably printed in a Racine newspaper. Susan Porter (1859-1939) grew up in Cooksville and was a teacher there in the Town of Porter as well as several other schools, retiring to Cooksville from Racine High School in 1924.)

“Who filled Wm. Porter’s pump with sand so it will cost a nice little sum to get it running once again? ‘The Boys.’ Mr. Porter offers a reward of five dollars to find out who did it.”

“Who worked harder and perspired more freely than they ever did in any hayfield to get that heavy mower on top of Mr. Newell’s shop? ‘The Boys.’ ”

“Is it ‘The Boys’ that lower people’s woodpiles in the night?”

“Four animals went to a circus—a duck, a pig, a frog and a skunk. All of them got in except one. The duck had a bill, the pig had four quarters and the frog had a greenback, but the skunk had only a ‘cent.’ ”

“A good many cisterns are dry and people are getting ice from the pond to wash with. Some fall in and find two feet of mud under the ice.”

“The Old Settlers of Cooksville and Vicinity … gathered together in Annual Reunion on that date (the second Reunion, September 9, 1902)… A basket picnic in the grove had been planned, but wireless suggestions of possible frost made the cozy fire in the basement of the church an immediate center of attraction…It was opened with music by a wonderful little orchestra, the four young daughters of Mr. and Mrs. Santos Soverhill of Janesville….

“This was followed by G.E. Newman Sr. (who) emphasized the importance of the annual re-union, so few such gatherings being possible to the older members.

“J.K.P. Porter Sr. pictured the surrounding country as it was in 1846, when he came west and the pleasant gatherings of the old time, after which he read a very appropriate poem written by his wife, Mrs. Eliza Porter…John Porter alluded to melon patches, and youthful escapades… Mrs. Minnie S. Savage read a brief In Memoriam entitled “Our Dead,” in which she spoke of the harvest of affection brought in from the field of life….

“About seventy were present, and six deaths had occurred during the year…” 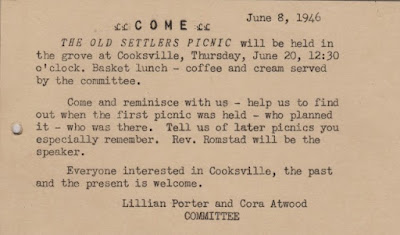 "…Mr. Tolles has ever been active in political and community affairs. He was a member of the Wilder school board for 20 years, a town supervisor and a member of the Porter Republican committee…About 35 years ago he helped organize and manage the Porter band, and a band hall for that organization was built on his farm. The band was very active for a number of years, playing many engagements in Janesville and other cities in this state and Illinois.”

(The band hall, built c.1890, still stands on the old Willis Miron Tolles farm on the corner of Tolles Road and County Highway M. The unidentified clipping dates from c.1926.)

“A great white cat, 16 years old, that hunts rabbits and other wild animals and birds, is the pet of Mrs. Electa Savage, residing at Cooksville, a few miles south of Stoughton. Last week the big cat brought in eight rabbits, a meadow mole, and several sparrows. She will tackle a ground-hog without hesitation, and more than one dog has met with disaster while encroaching on her territory.”

(An undated clipping, probably from a Stoughton newspaper, about Electa Savage (1845-1927) and her cat.)