The 180th Celebration of the founding of the Village of Cooksville will be held on Saturday, June 18th, 2022, throughout the historic village, and the public is invited.

Cooksville, established in 1842 is located in the Town of Porter in northwest Rock County. The Celebration will begin at 3:00 p.m. at the Cooksville School House at the corner of State Highway 59 and Church Street in Cooksville. The event is free and open to the public, with parking on the Cooksville Public Square next to the historic School House.

The Celebration will start with an opening program at 3 p.m. in the School House with brief presentations about the history of Cooksville . This will include comments by the six participating village organizations, which are the Cooksville Community Center, the Cooksville Lutheran Church, the Low Technology Institute, the Cooksville General Store, the Masonic Lodge, and the Historic Cooksville Trust, Inc.

Following the School House program there will be walking tours of the village from 4 to 6 p.m., with maps provided and with stops at the participating organizations’ five historic village buildings. At each site, representatives will be available with information and with refreshments.

The historic Village of Cooksville looks forward to sharing the village’s special story of 19th, 20th and 21stcentury life in southern Wisconsin.

The story of old Cooksville---“A Town that Time Forgot”--- can be experienced today because its historical character is largely preserved. More than 30 historic buildings, structures and archeological sites remain in the village including the Public Square or Commons, the Cooksville Schoolhouse, the oldest General Store in Wisconsin, the old Cemetery, two historic churches---the Lutheran Church and the Congregational Church---and more than 20 historic homes and barns.

The original settlers, John and Daniel Cook and their families, bought the land from the U.S. Government in 1837, when Wisconsin Territorial lands first went on sale in the area. Then in 1840, they journeyed by oxen wagon from Ohio to their new farmland, built a home and then platted their Village of Cooksville in1842. Other settlers followed, and the village quickly grew, including a large new Village of Waucoma platted next door to Cooksville in 1846, which is part of the village’s long story. 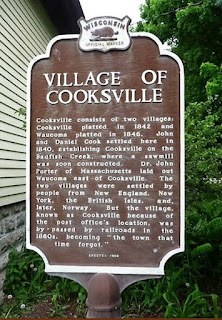 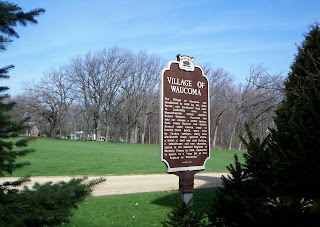 Because Cooksville was by-passed by the boom in new railroads in the mid-1850s, the village’s growth slowed, which meant the survival of much of its distinctive 19th century pioneer architecture. The village became known as “A Wee Bit of New England in Wisconsin” and was once suggested as a perfect location for an outdoor museum of Wisconsin’s early historic architecture. 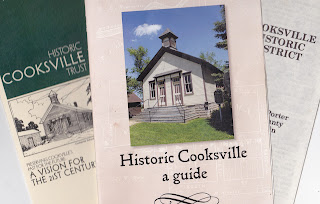 In the 20th century, Cooksville experienced early and important historical recognition by being officially listed in the National Register of Historic Places, the Wisconsin State Register, and designated a Historic District by the Town of Porter---all because of the village’s well-preserved and well-documented history and historic architecture.

Thanks to preservation efforts, Cooksville continues to celebrate and share its story of an early settlement in Wisconsin.