The first schoolhouse built in the Village of Cooksville was a log structure, probably constructed in the late 1840s and possibly located in block 9 of the Village of Waucoma, which is now the eastern part of Cooksville, which was founded in 1842. A schoolhouse was an early and important addition built by the first settlers.
The log school served until a new brick schoolhouse was erected sometime in the early1860s in block 11 of Waucoma, facing the Public Square. (It would also become the site of the present wood-frame schoolhouse). The land for the early brick schoolhouse was formally deeded to the Town of Porter School District by John and Ann T. Porter on November 2, 1864. It was “to be used for school purposes, also to be fenced at the expense of the District.” The distinctive vermillion bricks for the school—and for several village houses— were made locally in the Village,
By 1886, the brick foundation of the schoolhouse was deemed unsafe and the school too small, so it was replaced with the present wood-frame structure. This new and typical one-room schoolhouse had two front doors, one for boys and one for girls, with a small bell-tower to summon the children to class and undoubtedly to announce other important occasions in the village.
The present Cooksville Schoolhouse has served the community in the 19th and 20th centuries by hoisting many functions in addition to its primary role of educating the children. It was used for church services, with Thomas Morgan, a neighbor, bringing his little melodeon pump organ across the street from his house for the musical portion of the services. And it was the focus of other social and cultural community events
In 1950, an addition to the old Schoolhouse was built to the east to accommodate boys and girls indoor toilets and to and a furnace room, with a new back entryway. Also, the front exterior entry stairs and the two entry doors were removed, and a new smaller entrance door was placed near the southwest corner of the building. (Apparently, an expansion of the building was anticipated.) By then, the rear playground featured added swings, teeter-totters and a merry-go-round.
The Schoolhouse and the village’s nearby Public Square were the location for many popular “Play Day” events in the village to which other area schools in the township were invited and which featured competitive sports games and other events, And the new Cooksville Mother’s Club continued to provide local support and services to the school and community, including compiling and selling the Club’s cook book in 1951 to help raise “cold cash…subtly and painlessly extracted at card parties, dances, bake sales, teas, and auctions for the welfare of the community.”
Eventually, in 1961, the nine local rural schools in the Town of Porter were consolidated into nearby cities, and the rural one-room school buildings were no longer needed, with most being converted into residences. However, the concerned Cooksville citizens gathered together in 1962 to preserve the Village’s historic school building. They raised funds and formed the new “Cooksville Community Center,” to which the local school district authorized the sale of the school property on July 23, 1962, for the appraised price of $2,150.
The Cooksville Community Center, Inc., was formally incorporated on August 22, 1962, as a corporation “without stock and not for profit” with one class of members entitled as “Voting Members.” And the Cooksville Schoolhouse began its new life as a center for community activities, including the continuation of educational programs, card parties and other events.
In 1980, the historic Schoolhouse was listed in the National Register and the State Register of Historic Places as part of the official Cooksville Historic District, and the Schoolhouse was also included in the Town of Porter’s new Cooksville Historic District preservation zoning, as well.
In 1985, as part of the building’s restoration, the original western front entrances and porch and stairs of the Schoolhouse that had been removed were restored, and the southwestern corner entrance was removed. The Schoolhouse once again faces the Village’s historic Public Square or Commons. 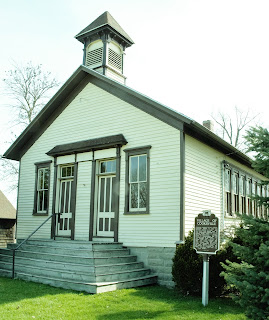