Cooksville Through the Years: More Bits and Pieces of Life in the Village .....

Thanks to several past village historians and collectors of Cooksville’s history, the Cooksville Archives contain a great deal of valuable evidence (and fun anecdotes) of everyday village life over the past 175 years.

Here are some of those historical notes. Many are quoted from the sources — newspapers, diaries and letters — in the Archives:
1836.  The population of the Wisconsin Territory (which included the present Iowa, Minnesota and part of the Dakotas) was 22,214 when it was first established in1836, with about half or 12,000 living east of the Mississippi River in what is now the State of Wisconsin. The early settlers often followed narrow Native American trails as they traveled through the prairies toward what soon would be Cooksville. 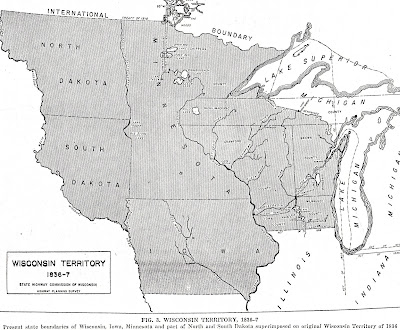 1840.  John Cook bought 80 acres of land in Rock County from the U.S. Government when sales began in 1837.  After arriving to what soon would be his home near the Bad Fish Creek, Cook and his family first lived in their oxen wagon while building a temporary log cabin.
1842.  Cook platted his Village of Cooksville and constructed a saw mill at the end of the newly-named Mill Street on the banks of the Badfish Creek; then he built his home with hewn posts and beams and clapboard siding—the present Cook House.
1842.  On September 28, 1842, Daniel Webster, of Marshfield, Massachusetts, sold to John Porter, of Duxbury, Massachusetts, 952.22 acres of land in Rock County, Territory of Wisconsin (for about $1.65 per acre).  Webster had purchased the land from the U.S. Government in 1837.


Porter's new land was just to the east of John Cook's newly platted village of Cooksville. Four years later, in 1846, Porter platted the larger Village of Waucoma next to Cooksville.
1849.  “Post Office established in Cooksville in 1849, mail brought horseback from Union, on the main stage-road from Janesville to Madison…”  The growing community of Union was the mid-way rest stop with an inn and tavern between Janesville and Madison; Cooksville was the only other village in the area. [History of Rock County, 1879.]
1850.  Cooksville grew quickly. Its businesses included a saw mill and a grist mill, the Waucoma House stagecoach inn and tavern, a sash and door factory, three stores, a blacksmith shop, a wagon shop, a harness shop, a tailor shop, a cabinet maker, two shoe shops, a post office, a log school house, an academy, and two brickyards.
1866.  “Mr. John P. Van Vleck [of Cooksville’s Van Vleck Farm Implement Factory] is turning out great numbers of the Eureka Corn Planters.” His butter churns and potato planters began selling very well, as did his “handy farm gates.”   Van Vleck (1818-1901) was one of the oldest settlers in Rock County, and his Farm Implement Factory was the oldest one in Wisconsin. 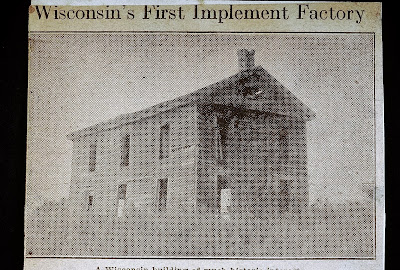 Van Vleck's implement shop was powered by a horse walking in a circle. It also housed a second-floor meeting room, often used as an advanced school hall. In 1928, the deteriorated building was torn down.
1873.   “A son of Mr. Hubbard Champney, while plowing out corn unearthed a piece of metal which…proved to be an old Mexican silver piece about the size of a dollar, and bearing the date 1350 (sic).” (Perhaps a typo for "1850"?) [Evansville Review 1873.]
1875.  “Mr. Hoxie found a few days since, an unfinished arrow, a spear head, convex on one side, slightly concave on the other, which measures five inches long and two and one-fourth wide. This is one of the largest of this kind of Indian relics ever found in the vicinity.”
1876.   “A Pioneer Festival is to be holden (sic) at Cooksville Wednesday to-day. There is intended to have an early picnic supper, and the balance of the time will be devoted to social pastime, and talk of pioneer life in that early settlement of that place. Evansville ought not to have that little burg outstrip it in social enterprise and pioneer movements.” [Evansville Review, 1876.]
1877.   “The Old Settlers reunion at Cooksville was a very enjoyable evening…by ye old folks….it was voted that the organization be made permanent with meetings held semi-annually… Mrs. J.K.P. Porter took the stand and read an original poem written for the occasion. The poem was good, abounded in thought, and was full of the pathos of ye olden times. She was vociferously enchored (sic).” [Evansville Review, 1877.]
1878.  “The terrible mud has started a subscription paper to raise funds to build sidewalks in Cooksville… to lay plank walks on some of the principal streets… at least enough so that one can get to the post office without getting lost in the mud…This town is putting on some style with sidewalks and now a street lamp at the crossing in front of Mr. Robertson’s store…”.
1879. The village’s first church—the Cooksville Congregational Church— was built in Cooksville, designed by the village’s own expert designer-carpenter, Benjamin Hoxie. The church included a lower-level “parlor,” which was used by other churches and local organizations. Previously, church services had been held in the saw-mill, the schoolhouse, and local residences.
1879.  “This ‘burg’ [Cooksville] is putting on metropolitan airs with four street lamps. Mr. James Fairgrieve, our tinner, has displayed both taste and skill, besides a generous gift of a fine street lamp, and the same has been put in position at the corner of the church by B.S. Hoxie.” [Janesville Daily Recorder.]
1880.  “Sunday while Mrs. Aris of Janesville was walking down town [in Cooksville] she fell through one of our trap sidewalks and received some slight injuries.”
1880.  “The Sunday School festival and New Year tree on New Year’s Eve was a happy time for all interested, and the number interested was more than the church could hold…The tree stood some over twelve feet high, beautifully decorated with gifts for all. Even the pastor, Rev. O.G. May, was not omitted, for among his presents was a fine metal plated string of bells presented by the boys and girls, which was an accompaniment to the new cutter presented by the older people…”
1880. Cooksville businesses now included a grist mill, two stores, two blacksmith shops, an agricultural implement factory, a tin shop, a cheese factory, a brick school house, a Good Templars Hall and the Waucoma House hotel and tavern.
1883.  “As we stepped into the studio at Mr. Dow’s old home, we could not help but remark that Miss Brash [school teacher?] has fully succeeded, in drawing out the artistic qualities of our home talent, along the line of painting… This is indeed a land of artists. Cooksville: Most every other one you meet has brushes and a palette or an easel under his arm.” [John Dow’s daughter, Leila, went on to teach art and organize the Madison Art Guild.]
1894.  “Mr. Forest has the frame up for his new blacksmith shop. That makes five blacksmith shops in Cooksville Those of Messrs. Graves, Barry, Courter, Hanson and Forest.”
1903.  “The Cooksville post office has been discontinued and all mail formerly addressed to that office should be addressed to Evansville RFD.” [Wisconsin Tobacco Reporter, 1903.]
1915.  From Bryon Campbell’s book, “Pioneer Days,” published in 1915:  “The next stop [near Tolles Road on the stage coach route from Janesville to Madison in the 1840s-50s] was the Ball Tavern, so called because of the sign that hung from the limb of an oak tree at the corner of the house, a round wooden ball about as large as a man’s head. This tavern was built by a Mr. Osborn.”
1936.  “Cooksville Woman Was Movie Star’s Teacher.”  That was the headline of a 1936 story in the Janesville Daily Gazette. The woman was Susan Porter (1859-1939) who was living in the Backenstoe-Howard House (“Waucoma Lodge”) on the Public Square in Cooksville.
Susan had been a teacher at the Racine High School, and the famous actor of stage and screen, Fredric March (1897-1975), was one of her students. March had written Susan a letter in 1936, which prompted the newspaper story.
March closed his letter with, “…as ever, your devoted pupil…” March starred on stage and in films from the 1920s to the 1970s.
1962.  The Cooksville Community Center was established in the village’s one-room schoolhouse on the Public Square, after rural schools were consolidated in 1961. The CCC continues to support social, educational and entertaining activities in the community. 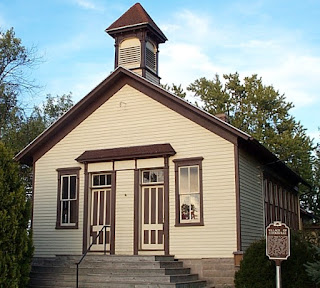 1963.  "Meeting Arranged by Cemetery Group. Those residing in the area surrounding the Old Ball Tavern cemetery… will hold a public meeting at 8 pm Monday, May 20, in the Porter band hall for the purpose of electing officers…. Land for the cemetery was donated by Mr. and Mrs. Porter M. Potter to the school district of Porter on Nov. 7, 1848. At the time the Ball Tavern school was located directly north of the cemetery. Several years later it was moved to a more central location and was named Forest Academy by Patrick Riley. Approximately 200 are buried in the cemetery [on the corner of Tolles Road and STH 14] and the earliest burial was in 1848. Among those interred in the cemetery are four soldiers, at least one of who was a Civil War Veteran.”
1973.  The Village of Cooksville’s history and its buildings were researched by the State Historical Society of Wisconsin and the Rock County Historical Society, with assistance from Marvin Raney, Cooksville historian. A portion of the village was nominated as the “Cooksville Historic District” and was listed in the National Register of Historic Places in 1973. It was the second historic district from Wisconsin to be listed in the N.R.H.P.
1980.  The Cooksville Historic District and the surrounding area in the Town of Porter and the Town of Union were further researched by the State Historical Society of Wisconsin. This resulted in the Cooksville Historic District being enlarged to encompass twelve additional properties of historical significance. Also, ten related historic and archeological resources within a two-mile radius of Cooksville were also determined to be historically important to the area. 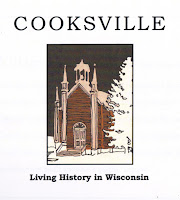 On September 17, 1980, the enlarged Cooksville Historic District and the nearby Historic Resources (mostly significant farmhouses) were listed together in the National Register of Historic Places as the first “Multiple Resources Entry” from Wisconsin to be placed in the National Register.
1999.  The Historic Cooksville Trust, Inc., was established as a non-profit organization to assist with historic preservation and conservation efforts in the historic village and surrounding area. The HCT provides technical information about resources, income tax credits, and matching grants. 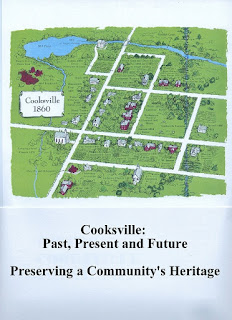 [Additional Cooksville-related materials for the Archives are always welcomed. Contact Larry Reed (608) 873-5066.]
Posted by Larry Reed at 10:48 AM