Some Items, Oddities, Mysteries in the Cooksville Archives - Part One

The Cooksville Archives are an important historical collection dating back 175 years and more. They contain materials in boxes, in files, on shelves, in card catalogues, in old chests, and in many notebooks, and includes old cook books, newspaper clippings, diaries and letters, poems and stories, photographs and photo albums, as well as slides in carousels, and paintings, prints and weavings—all presently stored in various places; attics, parlors, bedrooms, a barn and elsewhere.

Some of the archival paper items—writings, articles, diaries, clippings, notes— are strange, even mysterious and sometimes amusing, but always interesting. And some items, of course, are sad, even tragic. All speak to us by describing the past of Cooksville and the Town of Porter, from the earliest Wisconsin territorial days to the present.

Here are some of the unusual bits and pieces from the Archives. Some are quoted word for word, some are abbreviated, and some are summarized:

FROZEN ICE CREAM.  In the late 19th century, Cooksville had an ice-cream “shop” in the home of Electa Savage (1845-1927), who lived in the Benjamin Hoxie House on the Public Square. On summer weekends, she provided the community with fresh home-made ice cream frozen by ice from the Badfish Creek mill pond, the ice having been “buried” in her backyard ice-house pit, protected from the summer heat.
Electa undoubtedly gathered lots of news in the summers for the various local newspapers for which she served as the Cooksville Correspondent for many years.

BOOK MANUSCRIPTS IN THE ARCHIVES.  Two book-length manuscripts, one in typed original form and one a carbon copy in two volumes, are in the Cooksville Archives.
The two-volume carbon copy, titled “Country Growth,” was published in 1940 by August William Derleth (1909 –1971), an American writer and anthologist who lived in Sauk City, Wisconsin. Derleth was credited with bringing supernatural fiction into print in hardcover in the US that previously had only been readily available in the England. And he was a leading American regional writer of his day; his most serious work is considered to be the ambitious Sac Prairie Saga, a series of fiction, historical fiction, poetry, and non-fiction naturalist works designed to memorialize life in the Wisconsin he knew.
The other manuscript, unpublished, is titled “Gathering Waters,” written by Cooksville resident, Chester P. Holway (1904-1986) in the late 1930s and early 1940s. In it Holway describes a journey around Wisconsin during that time as he discovers historic and scenic sites, out–of- the-way places, and interesting people in his travels throughout the state. Holway was a journalist, editor and horticulture-writer, and lived in the village from 1941 to 1986.
Holway and Derleth apparently were friends and corresponded occasionally with each other, which is probably why Derleth’s manuscript copy  and a few letters are in the Cooksville Archives.


SIGOURNEY WEAVER. The famous American actress of stage and screen, Sigourney Weaver, saw pictures of Cooksville in the 1970s, provided by her aunt Sylva Weaver Kastler Rowland who owned a house in Cooksville for many years. (Sylva had married a Cooksville gentleman.) Sigourney told her aunt Sylva that she “admired the {village] greatly as a wonderful place for Summer Little Theater.” 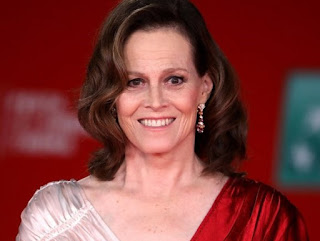 Sylva had owned the Van Buren House in Cooksville after her husband, Donald Kastler, died in 1947; she then sold the house to Michael Saternus and Larry Reed in 1976. Sylva shared Sigourney’s words with them in a letter she wrote, ending a note about Sigourney, “I trust you saw her in ‘Alien.”’ (Didn’t everybody?)
HAILE SELASSIE.  Speaking of famous people, Haile Selassie, the Emperor of Ethiopia, may have visited Cooksville in the 1930s (or perhaps later), according to a Porter family member. Selassie apparently knew a Porter (possible Joe Porter) on the University of Wisconsin faculty who was involved in world affairs or with agricultural issues.  Selassie may have consulted with the UW-Madison and with this Porter relative, and this may have led to Selassie’s visit to the large Porter farm near Madison at Cooksville, according to a report.  (At least, that’s the story.)
VISABLE FROM OUTER SPACE.  A boy from Cooksville created the largest permanent structures in the world, visible from outer space, because he was the best dam designer and builder in the world.  That was Cooksville’s famous son, John L. Savage.
Collier’s magazine wrote, “If you spin a globe of the world and jab a finger at a continent, the chances are good that you’ll strike a part of the earth that has been changed by John Lucian Savage [who is] changing the living standards of millions of people” by engineering those huge dams throughout the world in the 1930s and later.   The recently completed Yangtze River Gorge dam project was begun with Savage's studies.
Savage (1879-1967) grew up along the Badfish Creek that had three dams for him to explore, and then he went on to bigger things. Savage received many accolades and honors, including several gold metals—which were stolen from his home in Colorado on three different occasions.
Savage stayed in touch with his Cooksville friends, especially when the annual “Old Settlers Reunions” took place on the Public Square in the village, and he was fondly remembered as” the best dam man in the world.”
A friend of his, Benjamin D. Rhodes, later wrote: “Perhaps the final irony of his life was that John L. Savage, a man who hated publicity and was dedicated to public service, had actually left to posterity monuments as permanent as any created in the entire history of mankind.” (A lengthy 30-page article by Rhodes in the Wisconsin Magazine of History, Vol.72, Number 4, Summer, 1989, “From Cooksville to Chungking,” details Savage’s long career.)

A DIARY OF A CRUISE TO SOUTH AMERICA IN 1843.  William Micaiah Porter (1818-1891) was the oldest of the three brothers, sons of Dr. Isaac Porter, who all eventually settled in Cooksville. (William’s brother Joseph platted the Village of Waucoma in 1846 next to Cooksville and managed the sale of that new village’s lots.)

Before coming west to live in Wisconsin like his brothers, the 25-year-old William took a trip to Brazil as a passenger on a merchant ship for three months in 1843-44. He kept a detailed diary of his voyage to South America, which is now in the Cooksville Archives. The diary is a 57 page, 4” x 6” booklet, hand-written in ink, which describes his journey from his home in Charlton, Massachusetts, to Pernambuco and Rio de Janeiro in Brazil, traveling on-board the merchant ship “Brandywine.”
William sailed to South America to visit his uncle William, a merchant there, and to experience the sights of Brazil and would return home after three months with the “brig” loaded with coffee and tapioca. William’s diary relates his bouts of seasickness, the storms at sea, the porpoises and flying fish, and the sighting of slave ships sailing from Africa to America. He admired the impressive scenery of Brazil’s coastline and enjoyed lavish meals with Brazilian and American merchants in Rio. He also caught a glimpse of Pedro II, the Emperor of Brazil. And his diary tells of the slow-sailing back northward to home through the doldrums of the mid-Atlantic.
At the end of his diary, William includes some of his expenses on the three-month trip and lists the various types of monies he carried with him for his expenses: “One hundred & five dollars in American gold, Twenty eight $ [dollars] ninty [sic] eight cts in british gold, Thirty dolars [sic] twenty-five cts, Three dollars sixty cts in ten cent pieces. Amount $167.83.”
Five years later, in 1849, William Porter moved from Massachusetts to Wisconsin, but soon headed west to mine for gold in California in 1850, but the records do not mention if he struck it rich. He returned in 1852 to become a merchant and implement dealer in Decatur, Wisconsin—until Mr. Brodhead’s railroad by-passed that new village because the local Decatur folks would not help fund his railroad construction, causing Decatur to become a ghost-town. William then moved permanently to Cooksville (where his two brothers also lived), bought farm land, operated a sorghum mill, and settled down, becoming a Town of Porter Supervisor and a Justice of the Peace.
William and his wife Aura had five children, one of whom was Susan Malvina Porter (1859-1939), who was very active in village life, collecting local history and maintaining the old Cooksville Congregational Church until her death. Her passing marked the last of the old local Congregationalists, and that first village church was given to the Town of Porter and used as the Porter Town Hall for the next 30 years.

[End of Part One: Some Items from the Cooksville Archives.]