Here are a few more interesting (and unusual) items in the Cooksville Archives, all Civil War-related, including a couple of hand-written stories, a travel log, and a photograph album. 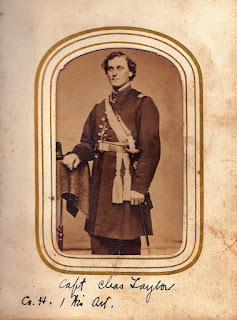 
The album has a handsomely embossed cover with gold-edged pages and a brass clasp and is undated and the original owner is unidentified. It contains 39 small photos of uniformed Civil War soldiers, some paper and some tin-type photos, and 10 photos of civilian-attired men including a child. Thirteen of the 49 photos are unidentified, and the photos fill the album’s pages.


The uniformed military men probably all belong to Company H, 1st Regiment of the Wisconsin Heavy Artillery; many are identified as such. The first photo in the album is labeled “Capt Chas Taylor Co. H. 1 Wis Art.”; perhaps the album belonged to him or his family. Some of the other last names include Hoyt, Hubbel, Prentice and several Warners. (Ralph L. Warner was a resident in Cooksville in the early 20th century.) 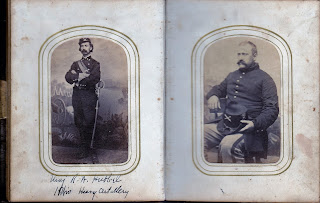 Although it's unclear if any of these soldiers or their relatives ever resided in or near Cooksville, there is no evidence of that. The album’s origin and past owner(s) remain mysteries. Some of the photographs were taken by the "New Gem Gallery" in Alexandria, Virginia, the "Only Place in the City," where "Beautiful  Pictures for Albums... can be taken in cloudy weather as well as clear, and be finished in twenty minutes," so states the backs of several of the tintypes.


A NIGHT OF TERROR IN THE CIVIL WAR.  The Archives contain a copy of a 15-page, hand-written account of a frightening Civil War episode involving an incident in the State of Kansas in 1863, which occurred shortly after a band of Confederate guerillas carried out an infamous massacre known as the Quantrill Raid. That event at Lawrence, Kansas, occurred on August 21, 1863, resulting in the killing of over 150 people.
The first-person account of the episode after the murderous Raid that is in the Cooksville Archives is titled “A Night of Terror.” It relates a fearful night on the Sunday after the Quantrill Raid, when another raid on the community was expected.


The writer is named Mrs. Duncan C. Allison, “nee Miss Isidore Johnson,” and she apparently was a survivor of Quantrill’s raid at Lawrence. In her story, Mrs. Allison tells of the burying of the victims of Quantrill’s massacre and then describes what happened the following Sunday, when news of a second raid was suddenly shouted in the night, raising the alarm to the exhausted and recovering community. With that warning of more possible killing and burning began the writer’s story of “Night of Terror.”


Heeding the sudden warning of a second raid by the Confederate marauders, frightened citizens quickly gathered up their children and a few valuables and fled into the night fearing the arrival of gunmen on horseback. Stumbling in panic in the darkness, they ran to hide in the nearby Kansas corn field.


As the people fled into the tall corn stalks, the writer recounts that one “old lady stopped, crying, ‘I have forgotten my mother’s teaspoons,’ and started back. Her daughter said: ‘never mind the spoons, Mother, we have no time to get them.’ But when the old lady replied in reproachful tones: ‘Your Grandmother’s spoons that I brought from Scotland with me must be saved,’ she let her go….”  The frightened people hid in the corn fields for hours.
But it turned out to be a false alarm; there was no second raid, and those Kansas folk including the writer of the story survived their fear-filled night of terror and crept back to their houses. The writer reports that the old lady who fretted about the forgotten spoons had sprained her ankle in her flight; however, “when telling of that awful night, she would say triumphantly, ‘But I saved my Mother’s teaspoons.’ "


But why and how a hand-written copy of Mrs. Allison’s story of that Kansas night ended up in the Cooksville Archives is unknown. At any rate, this personal account of enduring that night of terror is told in simple, vivid, touching detail.


FROM COOKSVILLE TO A CONFEDERATE GENERAL.  In the Archives is a story titled “The First Tragedy of the Town of Porter.” The tale is hand-written on five-pages in pencil and is unattributed.  It appears to be a truthful story, which has a Civil War connection. Here is a summary:


A Kentucky slave-owner named Mr. Castleman bought several thousand acres from the U.S. Government in the 1840s in Section 9, Town of Porter, near Cooksville, purchased through his local agent, Frank Sayre of nearby Fulton. Castleman built himself a large farm house on the rich, well-wooded, well-watered land for his family.
Castlemen’s daughter, sent out East to school, met a handsome, hard-drinking young man named Kile, an Eastern wine-merchant’s son. They married and moved to the Midwest farm in Wisconsin, which Kile’s family hoped would ease his drinking habit.


From then on the story gets a bit convoluted, with Kile’s  new wife apparently spending too much time traveling the Rock County area with the young  Doctor Tandy (a foster son of Mr. Castleman’s, no less), perhaps distressing Kile and apparently leading to Kile’s sudden death, either from suicide by drugs or by excessive drinking, or both.

The sad story, as written, does not end there. It continues with the involvement of the newly- widowed Mrs. Kile’s two Castleman brothers. They had spent their boyhoods in the 1850s on the Castleman farm near Cooksville. But when the Civil War broke out, the brothers went south to move the Castleman family’s slaves from Kentucky further south to a “safer” Arkansas. One of the brothers then enlisted in the Confederate Army, quickly rising to the rank of Major General. And thus ends this story of the” First Tragedy,” one of love, death and civil war.

Apparently it is a sadly true story involving early Town of Porter settlers, excessive drinking, and the making of a General in the Confederate Army. (Note: The Castleman brother may have become the quasi-famous Confederate General John B. Castleman (1841-1918), of Louisville, Kentucky, who survived the war and a subsequent execution order, living to later became a U.S. Army Brigadier General.)

FROM COOKSVILLE TO NEW ORLEANS IN 1864.  Recently donated to the Archives are a few pages of a travel log kept by Ezra Stoneburner of Cooksville, who enlisted in the Union Army in 1864 and traveled south to participate in the Civil War campaign. He kept a simple travel log of his journey, the first pages of which were donated by his descendents to the Archives, along with some Stoneburner family genealogical information.


Stoneburner enlisted into Company F, Thirty-fifth Wisconsin Infantry Regiment, organized at Camp Washburn, Milwaukee, in 1864, apparently the last company mustered into U.S. service in the Civil War. The Company traveled by land and rivers down to New Orleans for active duty in areas of Louisiana, Arkansas and Alabama. Along the way Corporal Stoneburner briefly described some of the scenery, the weather, and his illnesses in those first pages of what must have been a lengthier log-book.


After the South’s surrender, Stoneburner’s Company was transferred to Texas and the Rio Grande River area until March 1866, when he—now Sergeant Stoneburner—and his Company were mustered out of service. He returned to Madison, where he was finally paid off and discharged on April 16, 1866.


Stoneburner returned home to Cooksville and once again operated the old grocery store on the corner of Main and Dane streets in the Waucoma part of Cooksville. (That store no longer stands.) He later operated a meat market and also farmed in the area.

Stoneburner lived in the village for the rest of his life, along with his wife Mary and their four children. In 1889 he bought “Waucoma House,” the old stagecoach inn and tavern, remodeled it and lived there. (The old inn was torn down about 1910.) Stoneburner was elected the first President of the Thirty-fifth Wisconsin Regimental Association in 1902 and died in 1908. The 78-year-old Civil War veteran is buried in the Cooksville Cemetery.


[The Cooksville Archives continue to provide interesting bits and pieces of our history. More items are always welcome. Larry Reed, (608) 873-5066.]