Here are a few more unusual items—a few documents, a story, a poem—from the Cooksville Archives that are interesting, or maybe just odd. They raise questions:  how did they end up in Cooksville and does that “cancer cure” work?

For some reason, a modern typed copy of the will of George Washington’s mother, Mary Washington, dated May 20, 1788, appears in the Cooksville Archives. The copy was apparently printed by The Central Wisconsin Trust Company, Wis.
Mary’s will, “registered in the Clerk’s Office at Fredericksburg, Virginia,” states in part the following:
"I, Mary Washington, of Fredericksburg, in the County of Spotsylvania, being in good health, but calling to mind the uncertainty of this life…dispose of my worldly estate as follows…to my son, General George Washington,  all my land in Accokeek Run, in the County of Stafford, and also my negro boy George, to him and his heirs forever. Also my best bed…”
To her other son, Charles Washington, she gives “my negro man, Tom…” among other items. And she gives her other slaves to her other children and grandchildren, along with her furniture, china, beds, bedding, wearing apparel and silver spoons as a “token… of my love for them.”
And so on, for two pages....
Why is this copy in the Cooksville Archives? Probably because the 20th-century produced several wide-ranging genealogical researchers in the village of Cooksville. Some of their work is in the Cooksville Archives, which continue to be especially helpful and important for researchers involving the early settlers of the village.

QUEEN VICTORIA’S WICKED UNCLES.
Also, for some reason, the Cooksville Archives has a lengthy four-page, typed letter-cum-article entitled, “Those Wicked Uncles.” Internal evidence indicates that the piece was written in 1936 when Edward VIII was the British king (for less than a year) and is signed only with an “M.”
The subjects of the article are the seven playboy uncles of Queen Victoria (1819-1901), who were the surviving sons of King George III (1738-1820). It appears the article had been written as a letter and sent to a friend because the author at the end of the exposé piece asks the recipient to “Excuse the mistakes… I had to write this in a hurry...You might criticize it for me.”— And signs it, “Love, M
The author discloses the skeletons in the closets of those seven wicked uncles, relating their numerous amorous assignations, jilted lovers, profligate dissoluteness, frequent adulteries, and their general scandalous behavior in the late 18th   and early 19th- centuries. It’s mildly amusing, although the Queen was probably not amused.
The article’s author believes that the Queen’s wicked uncles’ behavior led to the “ultra-respectability” and moderation of the Victorian Era that lasted from 1837 to1901 under Victoria’s reign.

COOKSVILLE’S CURE FOR CANCER.
The Village of Cooksville has been a village of many cooks, appropriately enough.  It produced a number of cookbooks over the past 170 years, including an old one with a recipe for a “cancer ointment.”
The c.1850s cookbook with the “Receipt For making Cancer Ointment” also has recipes for concocting medicines for “Dropsy,” “Dysentery,” “Piles,” “Tape Worm,” and other ills, as well as recipes for the more usual cakes, cookies and sausages.
The old, handwritten, slender (18 pages of recipes) cookbook does not have a title and is not identified as to ownership or writer. It appears to have been created in the mid-19th century in ink and in a neat, old-fashioned script (an occasional old-fashioned “f- shaped letter is formed instead of an “s-shape” for the first “s” when a double “ss” is required).   Also, measurements include “gills,” “size of a hen’s egg,” or “a goose egg.”
The cancer ointment recipe is interesting because it contains, among its several ingredients, various tree barks: white pine, elder, elm, hemlock, red dogwood. Two of these ingredients— pine bark and red dogwood (ozier) species bark— have recently been associated with the treatment of certain cancers. 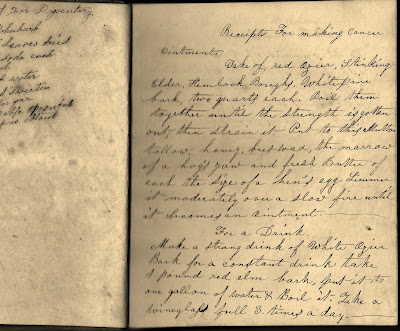 The “receipt” in the booklet for making the cancer ointment is as follows:
"Take of red Ozier, Stinking Elder, Hemlock Boughs, White pine bark, two quarts each.  Boil them together until the strength is gotten out, then strain it. Put to this Mutton tallow, honey, bees-wax, the marrow of a hog’s jaw and fresh Butter of each the size of a hen’s egg. Simmer it moderately over a slow fire until it becomes an ointment.”
This probably should not be tried at home. But, then again, why not?


PROHIBITION POEM.
Cooksville had a very active prohibition group in the 19th century.  In 1864, The Independent Order of Good Templars, a secret society that promoted total abstinence from alcohol, established a chapter named the Rising Tide Lodge, Number 123, in Cooksville. Meetings in the village were held every two weeks and appear to have been popular social gatherings until the end of the 19th century
One member, Electa Savage (1845 -1927), was inspired to write a poetic address instead of the usual lecture for a meeting of the village’s chapter, which normally met in the Congregational Church’s basement parlor. Electa’s poem was a denunciation of demon rum  at the February 28, 1888, meeting.
No doubt lots of tea and lemonade were served. Here are portions of her six-page poetic message to the temperance members:


“I’ve been asked to write an essay
And read it to the Club:
And so I sat me down one day
With a kind of pen called ‘stub,’


To write the rambling thoughts that came
Into my busy brain,
Thoughts that I know are somewhat lame
And yet-I hope not vain…


We ask all true and earnest friends
To help us fight the foe,
We’re bound to work until life ends,
Yes, the saloon must go.


Republicans and Democrats:
Don’t sit-astride the fence,
Just leave your whiskey and beer vats
And wake to common sense…

Then altogether with a will
Take off your hats and sing,
We’ll wage the war till Alcohol
No more shall be the King.”
However, the Cooksville’s Waucoma House tavern and inn had operated into the early 1900s. But its business lagged because of a lack of stagecoach travelers and village customers, and it soon went out of business as a tavern.  And, of course, the Eighteenth Amendment enacted in 1920 imposed Prohibition in the country, closing saloons— at least until 1933—but apparently hard cider could still be had in the village.


[There are more original poems and stories by Cooksvillians in the Cooksville Archives.]